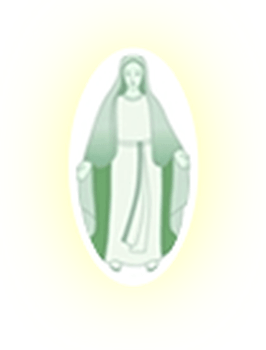 Our Lady Of Victories Catholic Primary School, a Voluntary Academy 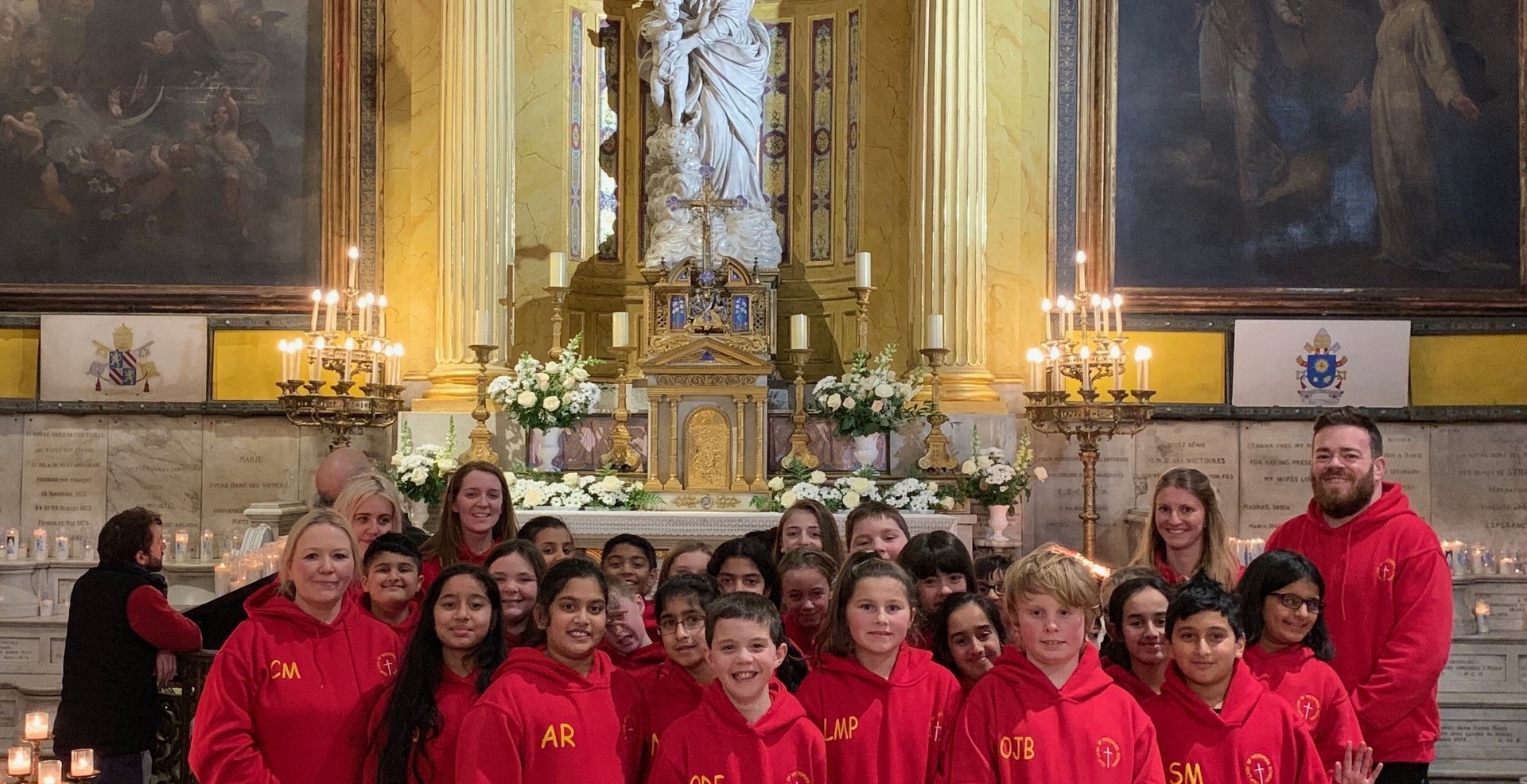 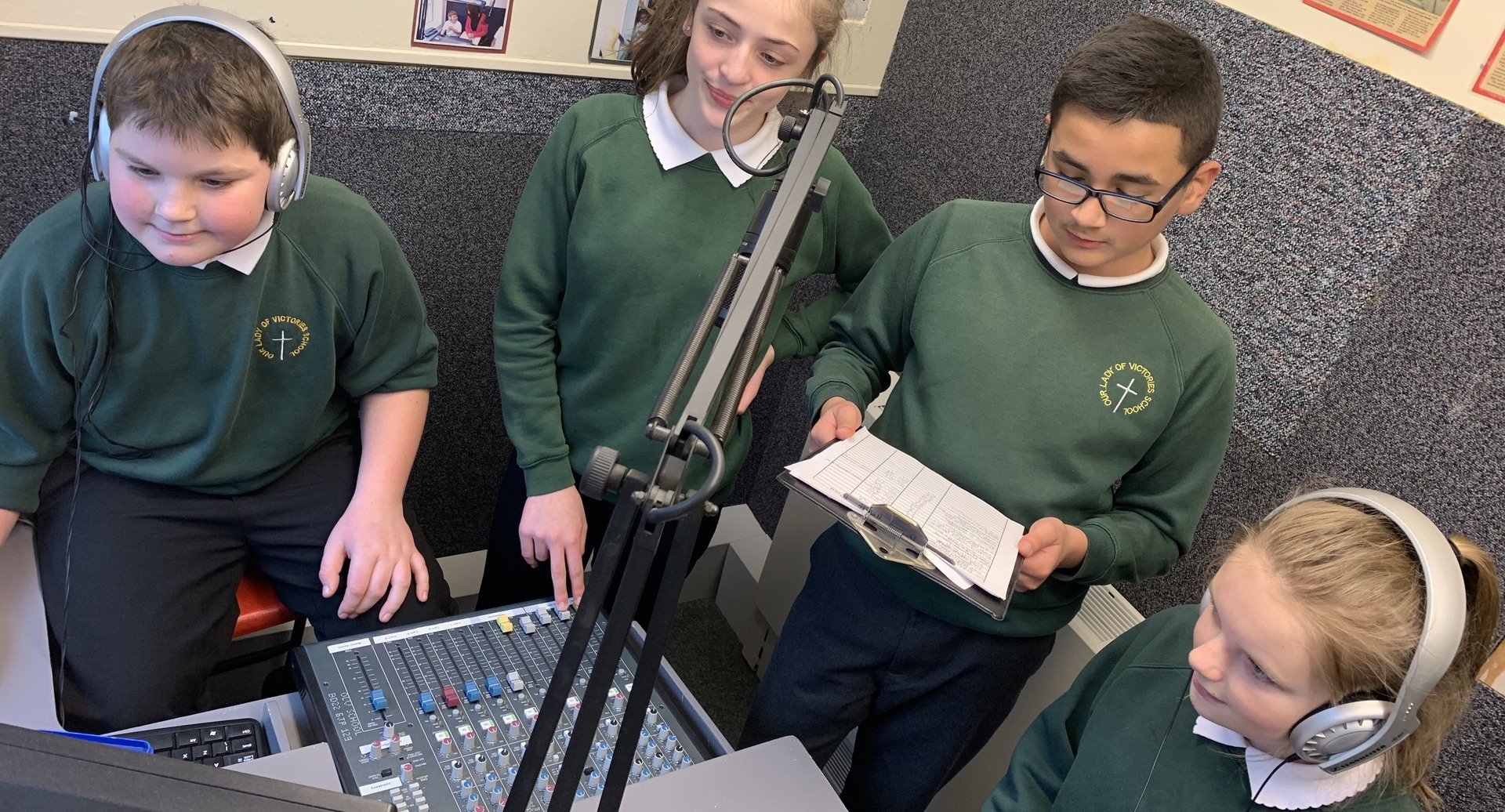 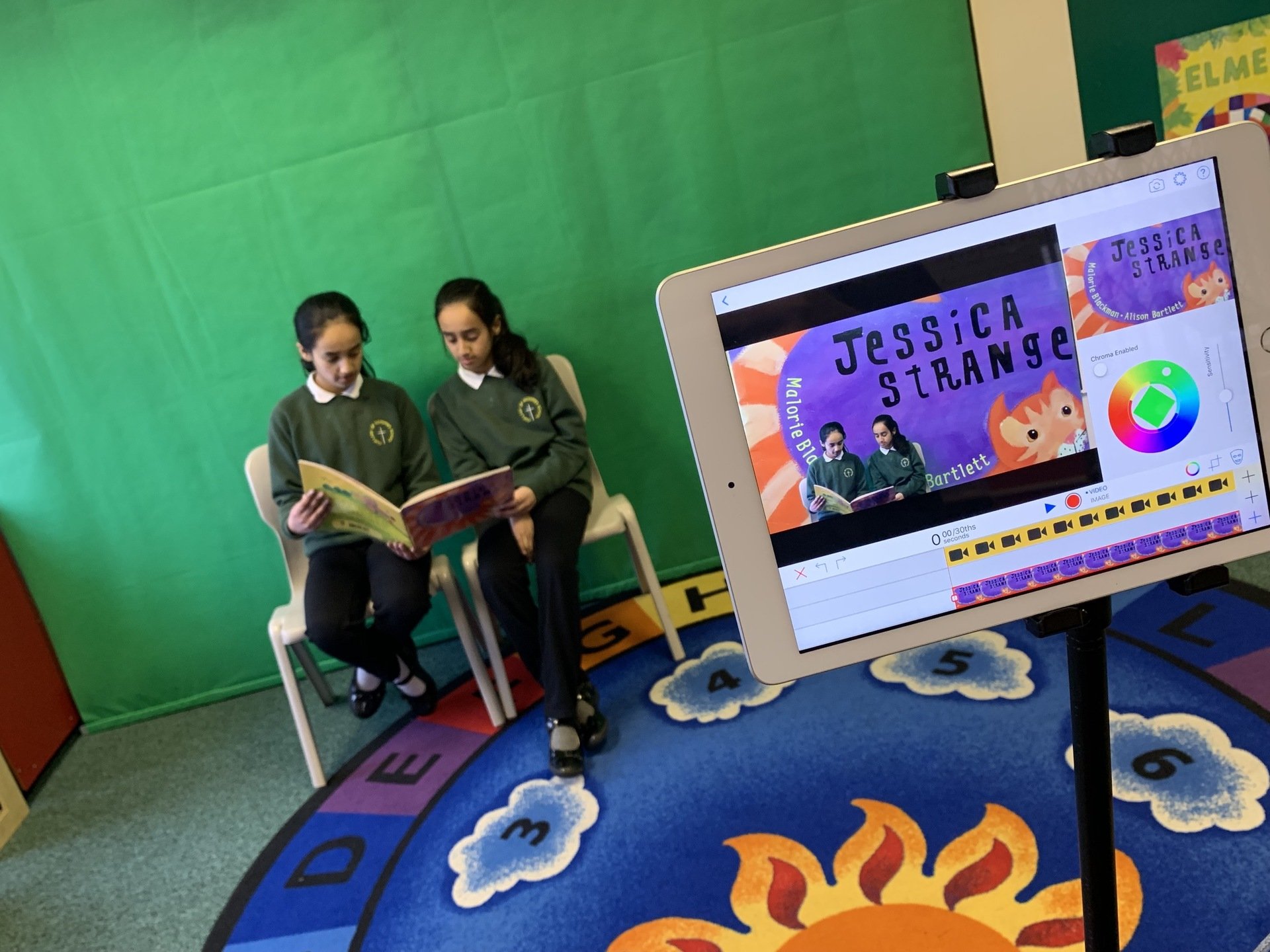 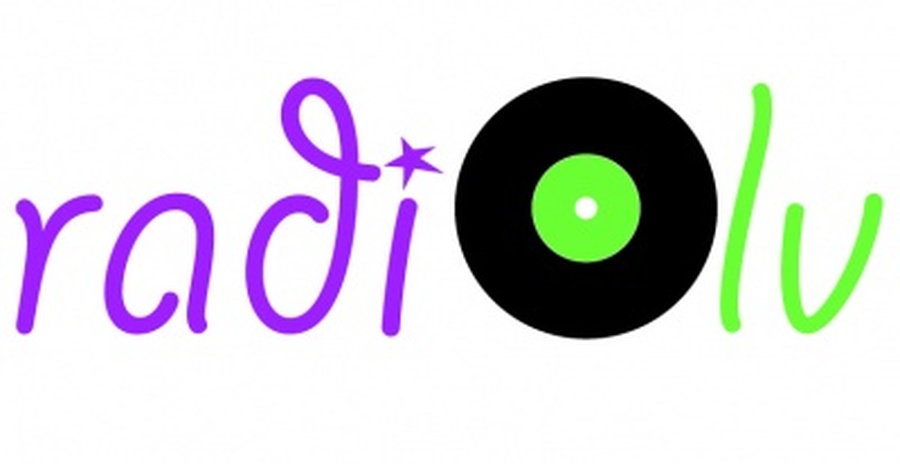 RadiOlv is the school radio station of Our Lady of Victories Catholic Primary School, Keighley.

Each Friday, at 3 o'clock, we broadcast live to the school from our state of the art radio station. We then podcast the show via our website.

The shows are presented by different members of our media team , and each show is made up of jokes, news, reports from school trips, poems, songs, and interviews with staff, visitors, and even celebrities.

We set up our radio station for a number of reasons:

We are very proud of the results. Standards in literacy much improved, the pupils look forward to every show, and the confidence of those who have been on the radio is wonderful. Listen to some of our podcasts, and we hope you enjoy listening to them as much as we do making them.

CLICK BELOW TO LISTEN TO A SELECTION OF OUR SHOWS. THE MOST RECENT SHOW IS THE TOP ONE.

Friday 21st May-Click below for the latest school news

Eva, Shraya, Isabella, Christopher and Annie from Year 2 reading some of their fantastic work about the Great Fire of London.

Friday 14th May 2021- The latest news from around the school, including Year 2 reading some of their work on The Great Fire of London

Friday 30th April 2021- Click below to for the latest school news and jokes, and an interview with our special visitor this week.

April 23rd. Happy St George's Day everyone. Click below for the latest school news and jokes.

16th April 2021- Click below for the latest news and jokes

Friday 12th March. A look at what has been happening across school during Science Week.

Friday 5th March. A recap of activities based around the book Rain before Rainbows.

Friday 14th February. Our Valentine's Day special, with some singing from year 6.

Friday 31st January 2020. This week we have a reading from a Year 4 pupil of his fantastic descriptive writing.

Friday 17th January 2020. Our first show of the New Year! Including war poems, brainteasers and some very special birthday wishes.

Friday 8th November 2019. This week we remember people affected by war across the world.

Friday 11th October 2019. This week we celebrate the Harvest Festival and show our support for Mental Health Week.

Friday 13th September 2019, the first broadcast of the year! We have some fascinating facts and some research about Charles Darwin from Year 6.

March 29th 2019. WE have a chat about Brexit, the environment and online safety. Of course, we have all the usual news and jokes too!

March 16th 2018. We have a new radio team in today. We hear a nursery rhyme from nursery, Swahili from year 1 and Year 6 tell us about their campaign to clean up the oceans.

23rd February 2018. We hear all about World Book Day, plus news and jokes from our media team.

On this week show we her 2 short recounts of Year 6's trip to Paris.

This week we think about 10 years of radiOlv. CBeebies came in today to work with us and ask us all about radiOlv. January 19th 2018. Thomas, Rebecca and Finn present.

Jan 12th 2018. We interview Nick Watson talks to us about the second world war, plus our new radio team tell us some terrible jokes, plus news and a weather forecast.

November 10th 2017. We hear Remembrance poems from year 6, plus we hand out certificates, draw the raffle and hear SOME TERRIBLE JOKES!

October 21st. We hear from Mr Devlin about his trip to Nepal, plus year 6 have been learning all about Space.

September 29th. It's National Poetry week, we hear lots of poems from our children, plus news about the work we have been doing about Nepal, plus jokes and lots more.

September 15th.  We have interviewed our town mayor.  Also, the usual jokes and news.

September 8th 2017. Our Lady's birthday! The first show of the year, lots of news and some terrible jokes too! :)

Friday April 28th 2017. Welcome back after Easter.  We are told about the importance of school rules, with the usual terrible jokes and news from around school.

Friday March30th 2017. Nursery perform a nursery rhyme from their nursery rhyme challenge, you can listen to a wonderful Year 5 poem and then there is all the usual terrible jokes and news from around school.

Friday March 24th 2017. We hear all about Paris from year 6, plus we find out about Fabmag, with the usual terrible jokes and news from around school.

March 10th 2017. Year 6 return from Paris, plus we hear from one of our governors, Mrs Gallucci. Year 6 also perform a playscript that Lizmia has written. Thanks for listening.

November 11th 2016. We hear from the Netball team, plus lots of news and jokes from around the school.

November 4th 2016. We hear news and jokes from around the school, plus learn about Bonfire safety and hear a Greek Myth.

October 21st 2016. We hear news and jokes from around the school, plus interview the head of our academy group, Mr Robson. Also, listen to a reading of Little Red Riding Hood and a weather forecast for the weekend.

October 7th 2016. We hear about a great story from Reception, plus listen to a reading of Room on the Broom. Of course, there are terrible jokes and lots of news too., news from around the school and a couple of jokes too!

29.4.16 You can learn about Shakespeare, St. George and get the latest news from around the school. Plus a special birthday rap for Mr Devlin (and no - he's not really 50!!!!!)

This week we have a special show to celebrate the Queen's 90th birthday. Happy birthday ma'am. She even pops in to do a short interview!!!

April 16th 2016. We hear about photography, news from around the school and a couple of jokes too!

Our regular news and jokes plus Year 6 interview some Year 2 children about how to make crispy buns for Easter.

A radio performed in rhyme.  A great show for reading week.

15th January 2016. We hear about Year 2's trip to Skipton  Castle, plus football news and a forecast for the weekend's weather. Plus some terrible jokes :)

Happy New Year. The first show of the new year. We hear from year 1 about what they got up to at Christmas, plus we have reports, news and jokes from around the school.

This week we are all going Dutch! We hear from Year 6 after their Amsterdam Adventure. We speak some Dutch and find out all they know about Anne Frank.

We hear from Lockerbie where year 5 are having an adventure.

November 13th.  An interview with Year 4 and a sports report.

November 6th 2015. Jokes, an interview with Mr Devlin and news from around the school.

October 15th. We hear from Year 1 and Year 3 about their latest school trips, plus much more...

October 2nd - Year 6 interview Mr Poulton from St Anne's and Year 5 share some information about their trip to the star centre.

September 25th 2015. News, prayers, and an interview with a former pupil who is now a successful businessman.

The first show of the new year from the finest year 6 in the World.  We talk to the Keighley Mayor, plus jokes, news etc.

June 12th 2015. We hear from Year 4 on their return from Halton Gill, year 5 tell us about their Quidditch match.

May 8th 2015. We hear from Year 5's Hogwarts newspaper, Year 3's Zoolab and the usual news and jokes.

May 1st 2015. Farah and Tyler report from the Good Shepherd Mass,  year 3 perform a short play they have written. Plus, terrible jokes and interesting news from around the school.

This week's show has an interview with Olly from CBBC, plus news, jokes, Year 5 stories and a live report of the Eclipse.

This week we wish mums everywhere a Happy Mother's Day, plus we hand out our merit badges live on the air. Year 1 tell us about their trip to see the dinosaurs and we say a fond farewell to one of our Year 2 pupils.

What a great show this week! We hear all about READING WEEK, plus listen to Year 6's adverts on Pulse Radio

27th February. We hear from the school council, plus the usual news and jokes.

The two shows below were made by year 6 in the studios of PULSE RADIO. They sound very professional indeed!

Bonjour!! This week we hear from the children in Year 6 who have just returned from Paris. 5/2/15

This is our Christmas show, 2014. We meet Santa and listen to seasonal jokes and carols.

Tyler and Frankie introduce the show this week. We meet John Grogan who is a politician and we also chat to some children from St. Anne's.

This week we talk to Mr Hings, Headteacher of Holy Family, plus Megan Halley, our local heroine, comes back to tell us about her adventures.

Year 6 read "Where the Poppies Grow" for Remembrance Day. 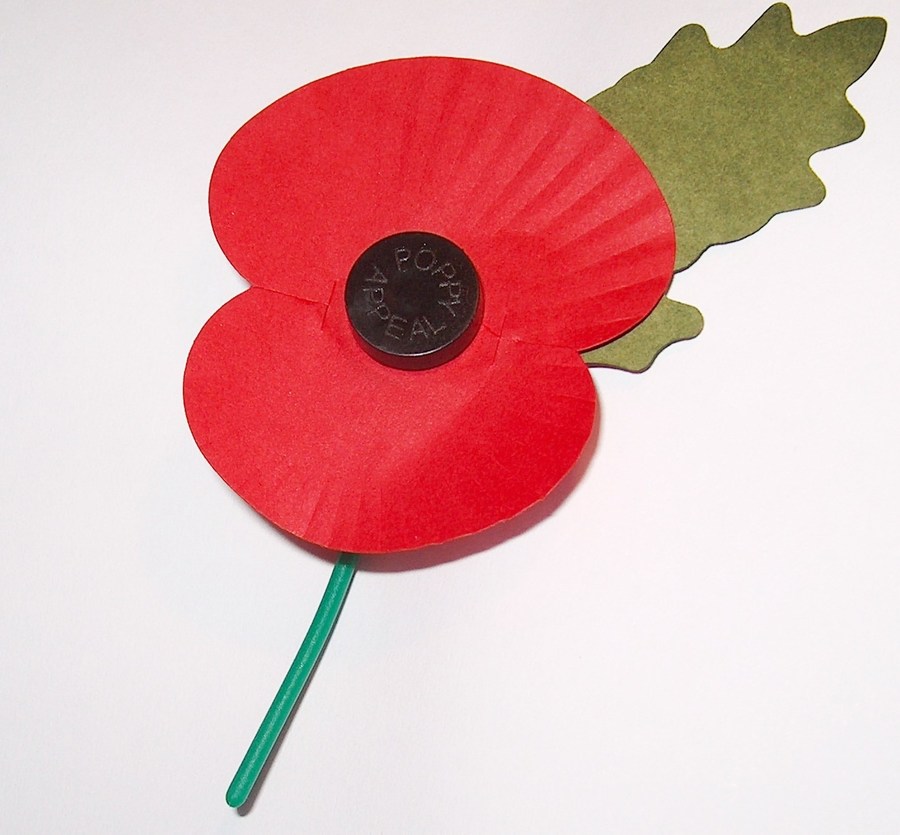 DJs Choo Choo and Usmano host this show. We learn about our patron, Blessed Christopher Wharton, plus year 6 read out their witches' spells.

DJs Choo Choo and Usmano present this week's show. We interview Mr Hings from Holy Family School, plus report on this week's panto. WE also interview Emily, who played Wendy in the play.

Year 6 say farewell to OLV and share their fond memories with us.

Molly and Iraj introduce a show with recounts of Year 5's trip to London and interviews with  the First Holy Communion children.June 20th 2014

This week Iraj and Molly O introduce news, a biography of Sir Titus Salt, jokes, and we learn about D Day on its 70th anniversary. June 6th 2014.

This week Abi and Hollie introduce Indian stories from year 4, a great story from Terri-Ann, plus the usual news and jokes. April 4th 2014.

This week's show has this week's charts, results of our music survey, jokes, news and much more. DJs Tanny and Issy present from Studio 1.

Happy New Year everyone. Tune in for health tips, a spelling challenge for Mr Devlin, jokes and news!

Merry Christmas everyone. Santa dropped by today for an interview. Listen in and find out about life at the North Pole. Plus recorders, jokes and news!

November 8th. Willy Wonka is live in the studio!!!! What a treat!!. DJs Tommy and HH introduce news, jokes and a special times table challenge!.

The first show of the new year. September 6th 2013. Sneha and Hollie Metcalfe present from studio 1.

May 24th 2013. Songs, stories and jokes. Have a great Spring Bank holiday!

May 17th. We talk to some Indonesian visitors about life in their country. Plus, DJs Snazzy and Meggy introduce news, jokes, stories and a song from Nursery.

May 10th. Letitia and Conan bring us stories from year 1, jokes and news.

April 19th 2013. DJs Billy and Joseph present from Studio 1. We have stories from year 3, news and a story from Taffy Thomas.

DJs Hassan and Junaid present this week's show. We have a report on popstars, Bradford City, plus a story from Augusta and lots more...

Listen to our Valentine's special. Georgia and Umamah have got this week's show together.

Saad and Katie report back from Paris, Year 2 report from the Thackray museum and we hear some facts about the Victorians.

LISTEN TO OUR LIVE SHOW FROM PARIS below. RAISAH AND HAMMAD INTERVIEW YEAR 6.

DJs JD, Mad Harry and Super Mike present on January 23rd 2013. Year 6 have been story writing, we learn about Origami, listen to a review of the latest video game, plus news and jokes. Thanks for listening.

LISTEN TO THE ADVERT FOR A NEW DEPUTY HEAD THAT
THE SCHOOL COUNCIL HAVE PUT TOGETHER BELOW.

DJs JD, Chewie and Conski present on January 18th 2013. Years 2 and 5 have done some fab writing, plus news and jokes. Thanks for listening.

Here is this week's show. November 16th 2012. Michael, Hayden and Hammad are live in Studio 1.

© 2021 Our Lady Of Victories Catholic Primary School, a Voluntary Academy.
Our school website, mobile app and podcasts are created using School Jotter, a Webanywhere product. [Administer Site]
We use cookies to provide you with the best experience on our website. Read our Privacy Policy to find out more.